Listen to the entire Symphony No. 5 at: http://www.youtube.com/watch?v=XJbclX2CfD4

Thanks to GoldieG89 for posting it. (You can also buy the entire CD at Amazon.)

On November 16, My wife, Grace, and I presented our findings regarding Autism and Music. This concluded a four month investigation of the effect if any clarinet lessons would

have on my daughter Emmanuela, who has been diagnosed with highly functional autism, and me as her father, conductor and clarinet instructor. I kept a journal of each lesson and Emmanuel also kept a journal. 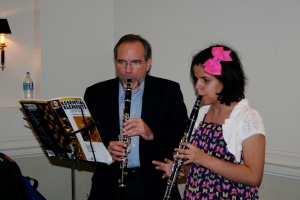 My wife presented a case for music and its regenerative powers of certain portions of the brain. “Mano” explained how difficult it was to play the clarinet but expressed her happiness of finally being accepted into a group, her school Band with a grade of a “B!” She is very proud of her accomplishments as we are.

It was difficult to hold back the tears when we talked further about Mano’s many challenges in middle school, socially (she is often a target of bullying) and scholastically with English intense subjects like history.

As a grand finale, Mano and I performed two duets from her Band book. Mano performed very well and there wasn’t a dry eye in the room. This was a special experience for me as a parent and my ties with my daughter have never been stronger.

It was a family affair of collaborating with Grace, a counselor, and myself, a musician. This was Grace’s idea that was first suggested during the summer. It was a great journey that still has not ended.

In STEPHEN HOLDEN’s New York Sunday Times (Nov 4, 2012) music review of the film, A Late Quartet, he states the credo of any musician worth being called a true musician:  The film “has an important point to make about classical music. For the musicians who play it, especially intimate chamber works in which the group members have to think, feel and breath as one, their instruments are vehicles for conveying strong emotion. Without passion, a performance, no matter how impeccable, is just a technical feat.”

Whether it is chamber music or a Mahler symphony, if there is no passion, no commitment, no personal understanding, no love, then there is no reason to be playing.

Bye Bye Birdie closed last Sunday in Lexington, VA.. I not only conducted the show, but also played clarinet/saxophone in the pit. The performances took place in a 250 seat “black box” making the shows very intimate. We had six sellout crowds for each show. The leads, especially Albert, Mr Macafee, and Rose, stole the show. Because of budget constraints, the pit band contained 12 very talented musicians instead of a full orchestra that the score calls for. I enjoyed the challenge of conducting and playing at the same time; my first time! Though the show itself is somewhat dated, this did not bother the most appreciative audience watching our very enthusiastic and professional cast. 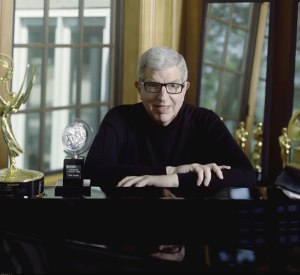 In this season of political rancor and of foreign governments attacking their own citizens, it’s a good time for all of us to step back  and take a deep breath and seek out something that will whisk us away, at least for a little while.

Marvin Hamlisch–The Man and His Music— is what is right with life. His melodies will live on even if the man himself is gone. I was appalled regarding how little time was spent by our news markets in commemorating this man’s great contribution to making our lives that much better; he was a real Mensch.

I was one of the fortunate fans who met Mr. Hamlisch in person. Several years ago, he presented a solo performance at a neighborhood venue and I was lucky enough to be in the audience. It was just an empty stage, a grand piano, a hand mike, and Hamlisch. He played his music, played other people’s music, bantered back and forth with the capacity audience, and showed his relaxed personable side while performing flawlessly on the piano. His arrangements from film and theater were full and romantic, but music of the stage in particular was certainly his forte.

About halfway through the program, he stopped suddenly, and blurted out, “Wait a minute, I hear a certain song!” Then after two piano chords, two local college students literally flew out of the wings of the stage, crossed downstage and much to the surprise and joy to all of us, began singing Hamlisch’s own award-winning “They’re Playing Our Song.” The improvised choreograph was professional and the crowd loved it. I knew these two musical theater majors and after the show I went backstage to congratulate them and to meet Mr. Hamlisch. He truly was “the real thing” on AND off the stage; sincere, funny, and charming. A great night for me.

I mourn his passing; we have lost one of the Greats. He had so much more to show us.