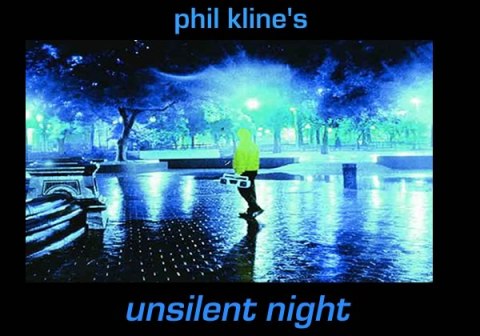 “People who have no background in music are drawn to it just as professional musicians are. It makes the community so strong and connected to music.” Sunday, December 22, marked the 20th Anniversary of “Unsilent Night.”

The brainchild of Phil Kline, who composed the music in 1992, it was intended to be played on portable cassette players, which participants shouldered as they walked through the streets of Greenwich Village.

The work, made up of sustained chords, bells and, toward the end, wordless choral singing, is recorded on four separate tracks; parade participants receive one of these to play on their devices. Some participants naturally pair up with another complimentary “track-holder” and then moves on to another.

These days, boomboxes have been replaced with iPhones and mp3 players. New York City has always been a city of music and theater. This combines those 2 in an improvisational flash mob. The Holiday Season in the Big Apple is to be experienced.

With such diversity and millions of inhabitants, the sprawling New York Campus become a Musical Village. Over 30 cities from around the world will take part in the Unsilent Night experience.

Bye Bye Birdie closed last Sunday in Lexington, VA.. I not only conducted the show, but also played clarinet/saxophone in the pit. The performances took place in a 250 seat “black box” making the shows very intimate. We had six sellout crowds for each show. The leads, especially Albert, Mr Macafee, and Rose, stole the show. Because of budget constraints, the pit band contained 12 very talented musicians instead of a full orchestra that the score calls for. I enjoyed the challenge of conducting and playing at the same time; my first time! Though the show itself is somewhat dated, this did not bother the most appreciative audience watching our very enthusiastic and professional cast.