János Starker, the Hungarian-born Jewish-American cellist has died; he was 88. Starker started playing the cello aged only five and gave his first public performances a year later. He studied at the Franz Liszt Music Academy in Budapest where his cello teacher was Adolf Schiffer; he was also greatly influenced by the composer and faculty member Leo Weiner. He made his professional debut aged 14 when he stepped in, on three hours’ notice, and played the Dvořák Cello Concerto.

One of the great musicians of our time. 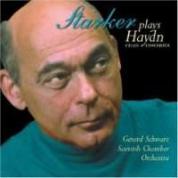